Using Photoshop, I scanned in Puzzle Pieces #1. After posterizing it, I created #2 and #3 by copying and flipping the image horizontally and vertically. I take great care to line up the flipped images each time because each new image builds on the previous one. Once the lines are off, I have to start all over again.
Then, the fun begins. Once a pattern is set, then I get to use Photoshop’s magical tools. 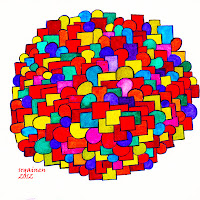 Round Boxes Dots was selected as a finalist from 940 images by the Jurors for Exhibitions Without Walls For Photographers and Digital Artists’ ABSTRACTIONS competition.  Submissions came from 197 photographers and digital artists from 35 states and 15 countries.
The ABSTRACTIONS show link will be live from April 21 to May 31, 2012.
Round Boxes Dots was the March 17, 2012 image in my 2012-Image-a-Day Project.

Find a button and a magnet with this design in my zazzle store.

Now that the distraction-turned-direction has become folded into my image-a-day commitment, I find myself making small watercolors paintings with an eye toward how they might looked multiplied and flipped horizontally and vertically, in addition to what else I might make happen to their colors under the flying finger of Photoshop.

What could these images be?

Each of these designs could be cut and painted tiles, quilt tops, or stained glass. Some could be effective needlepoint designs, although the diagonals might be tricky. Not for me, thank you.

I have abandoned the idea of making or working with glass and tile because of the safety equipment requirement, and I have made just one pieced quilt which left me in awe of every quilt artist on earth. I  painted some nanoscapes-inspired needlepoint canvas which was challenging and not as much fun as I thought it should have been.

I am left to paint, which I do every single day.

Image-a-day painting is an important discipline for me as I continue to learn about paint and painting, and continue to experiment with new tools and techniques. Each tiny painting is like the warm-up that a runner would do, the scales-practice that a pianist would play, or the thousands of baskets that a serious basketball player would shoot. How do you get better at something? Practice. Practice. Practice.

Images from this week:

I posted an image a day to Facebook from October 2010 to September 2011, and it’s time to start again.

During the first year, the images were thematic. They were keyed to months(pumpkins for October, leaves for November, lost-left-handed gloves of January, raindrops for April, ears of corn for July, pencils for September), or joyfully random (introducing the LLLama families in May and 30 new small friends in June).

Because both nanoscapes‘ geometric abstractions and whimsical small friends will be part of this project, the theme for 2012 will be “surprise!”  This first image is part of a “7 Hippos Marching,” a family portrait which is featured in The Small Friends Chronicles. Buy a matted print from ETSY here, and cool hippo products at zazzle. Want the original? Contact me directly (susangainen@comcast.net). 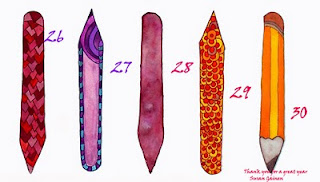 I posted the the last five Pencils and Crayons this morning. Creating an image-a-day began as a lark with last October’s pumpkins, and quickly became a commitment, a discipline, and a joy.

THE LLLAMAS  To introduce the LLLama Families in May, I needed to sit down and write their stories. This was fair. For more than two years the 30+ LLLamas had been nagging me to take them off the shelf and get them out into the world. After being posted to Facebook, they embarked on a world tour, leaving behind SpokesLLLama Rainbow. They will return to the small friends’ site in January 2012.

SMALL FRIENDS  When it was clear that the LLLamas would have their day in the sun, the other small friends who had been lurking on the nanoscapes website and in my studio finally put down their collective feet, and demanded both a month (June) and a website of their own. The nanoscapes and small friends had an amicable divorce in early June, and the small friends have their own website, blog, and The Small Friends Research Institute.

It’s been quite a year, or with a tip of the hat to one of my favorite songs, The Grateful Dead‘s “Truckin,”  — What a long, strange, and extraordinarily fun trip it’s been.

An image-a-day. In 2010, as an artist at the Hopkins (MN) Farmers Market, I was inspired by the farmer vendors to paint pumpkin post cards. After posting a pumpkin-a-day on my Facebook page in October, I could not stop.
By February 2011, the Post Card Project had moved from postcards to large sheets of Arches 140# paper. While most are seasonal, I also introduced the LLLama Families and the small friends, a group of whimsical creatures. The geometric abstractions called nanoscapes and the small friends are now in separate websites.
Month-by-month: January (lost left-handed gloves), February (missing socks), March (basketballs and a Shamrock), April (raindrops), May (introducing the LLLama Families), June (introducing the small friends), July (corn), August (heirloom tomatoes), September (pencils & crayons), October (pumpkins), November (leaves), and December (Hanukah candles & snowflakes.)
Will I continue with an image-a-day? Yes, but I will begin in an organized way on January 1, 2012. I have lots of projects to complete between now and then: a calendar, the small friends alphabet, the Lives of the LLLamas, and more! I am also committed to the work of the Small Friends Research Institute, which is dedicated to the discovery and documentation of new whimsical creatures.

What inspires me?  Even before 17 inches of snow fell on my balcony last weekend, I knew that my next Post Card Project would be The 31 Lost Left Gloves of January. This won’t surprise my FB friends on whom I have inflicted the 31 Pumpkins of October, the 30 Leaves of November, the 8 Hanukah Candles, and the 23 Snowflakes for the Rest of December.

Many people have theories about lost gloves, socks (wait for it — they are coming in February), pen tops, and paper clips, and there is a dissertation on the space-time continuum in there somewhere. My issue with gloves is less about my losing them and more about Phil-the-Cat who controls them under the Well-Established Cat Principle, “What’s mine is mine and what’s yours is mine.”
Here is a first look at the gloves, which I created with a Photoshop horizontal flip of a free clip art glove.  I will have traced and painted 31 very small left hand gloves, some of which may be inspirations for knitters.
Note from 2014:  These gloves art part of the 2010 Image-a-day project.