There are many competing philosophies of jewelry acquisition, and I have variously subscribed to: 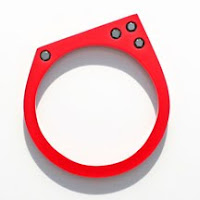 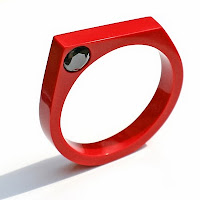 The “Signature Piece” plan has simplified my life: one set of earrings (30 years old), one long string of pearls and fluorite that I knotted on silk (making a pearl knot is my one and only jewelry skill), and one silver ring.

Thanks to Jennifer Merchant, I have a new signature piece. Jen carved this bracelet out of the Corian™ color “Hot” and added black crystals, which require very careful carving out so as to set them perfectly.  In honor of this piece of amazing RED jewelry, I have joined the Red Hat Society.

If you love Bakelite, you will love carved Corian™ — I promise.

Corian™ has been widely used for years for countertops and other kitchen and bathroom accessories. It is less well-known as a medium for jewelry (more on that later).  Jen Merchant is a Corian™ carver whose skill and artistry solved one my my most intractable problems.

Several years ago, one of two knobs for my bathroom light and fan broke almost in half.  It was usable (barely) and only slightly annoying.  Seeking a replacement, I visited visiting multiple hardware stores and a scoured a gaggle of websites. No luck.

A few months ago, the half became a totally unusable third of a knob and I started to use the remaining good one for both the light and the fan. Very annoying.

Fortunately, I met Jennifer Merchant, one of the other artists at a benefit for the Wings of Refuge Foundation.  I bought one of her plexiglass bracelets, and shortly thereafter, commissioned a shockingly red carved Corian™ bracelet in a color called “Hot.” Jen will set black crystals into it.

After admiring her jewelry, my brain kicked into gear and I asked if she would take up the Knob Challenge. She did a spectacular job, as you can see. The new knob has a much nicer shape than the original, and in one of many Corian™ neutrals, it looks great in the bathroom. My first comment: “Jewelry for the wall!” 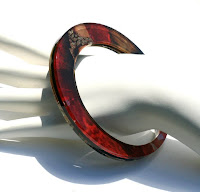 Whether you are interested in jewelry for your ears, wrist or for your cabinets or walls, visit with Jennifer Merchant — a great problem-solver.